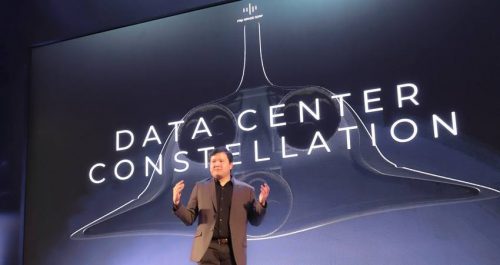 Bangkok, Thailand, October 20, 2020 / TRAVELINDEX / mu Space revealed the space technology development plan after the press conference of MoU signing between TOT and muSpace for advancement of research and development in space industry

This time is considered to be the fourth launch of payload and experimental equipment that will be delivered into space with Blue Origin on the flight of New Shepard rocket under the New Shepard Mission (NS-13). mu Space, led by Mr. James Varayuth Yenbamroong, a space and satellite industry entrepreneur and engineer revealed another space technology development plan, confirming the project to create the HTS (High Throughput Satellite).

• Currently maybe for sale, the one and only global space domain name, madeinspace.com – enquire here…

More than 40% of the materials inside the satellites are manufactured by mu Space and by domestic manufacturers using Thai technology. This satellite is expected to launch by 2024, another ambitious goal of mu Space is to become Thailand’s first foreign satellite service provider, when an Open Skies policy occurs.

The arrival of the low-orbit earth satellite or LEO satellite will be extremely beneficial and important for future communications systems. And it is also regarded as upgrading Thailand’s communication technology to be effective in order to compete with other countries.

In order to support new technologies such as 5G, Cloud storage, Online transactions, as well as security in doing business to be more complete, which makes mu Space a new alternative for Thai people, which can develop a working model in new directions. Able to meet the needs of the group of customers thoroughly while helping to make signal transmission more efficient and accessible to various areas.

And the highlight of this launch is the plan to establish a spaceship or the first small space vehicle in Thailand. Behind this plan, there are various important goals to reach.

1) Aiming to build a Data Center outside the Earth’s atmosphere. This will eliminate the major problems of creating a data center infrastructure such as to control the temperature to be more stable and it must be appropriate for the operating of the system, it must be low temperature. This will be used up to 40% of total electricity (research of Power Consumption by Subsystems), bringing the data center out to a cooler environment of -270 ° C., making it possible to eliminate the obstacles of temperature.

3) Safety due to the spaceships that floated in the sky and connected in a network or constellation. Making it secure from natural disasters and accidents on Earth caused by fires and floods, as well as connecting in large groups covering the entire world. This will make the connection smooth and accessible to every corner of the world.

• Currently maybe for sale, the one and only global space domain name, madeinspace.com – enquire here…

For the part of development, mu Space has begun testing the materials which are suitable for constructing. In August, there was a material strength testing by simulating a special projectile with the speed equivalent compared to the speed of space debris. With the speed over 1,100 m / s and finally be able to pass the level 3 bullet protection standard in 2020. At the moment, mu Space is preparing to construct a medium-sized factory in order to start building spaceships in 2021.