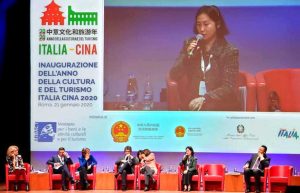 Macao (Macao SAR) – February 5, 2020 (travelindex.com) – As part of the activities held in celebration of the 50th anniversary of the establishment of China-Italy diplomatic ties, the China-Italy Year of Culture and Tourism 2020 opened in Rome, Italy on 21st January to promote bilateral exchanges and constructive collaboration between the two countries, with the aim to further strengthen the bond between the two peoples. The event coincided with the upcoming 9th Global Tourism Economy Forum (GTEF), hosted in partnership with Italy. To mark this occasion, Ms Pansy Ho, Vice Chairman & Secretary-General of GTEF, graced the opening ceremony as the guest representative of GTEF and gave a speech at the China-Italy Tourism Forum to share insights into China-Italy strategic cooperation in the development of tourism, setting the scene for creative and constructive flow of discussions to come. Meanwhile, the Global Tourism Economy Research Centre (GTERC) also rang up the curtain on the pre-GTEF roadshow activities, bringing together ministers and industry leaders from participating countries in Rome.

Entitled ‘Heritage and Tourism – China-Italy Cultural and Tourism Cooperation’, the China-Italy Tourism Forum aimed to boost the bilateral partnership in order to promote tourism and the common ground of profound cultural heritage that’s found in both countries. Chaired by Francesco Rutelli, the Italian coordinator of the Sino-Italian cultural cooperation, the forum received congratulatory letters from both Chinese President Xi Jinping and Italian President Sergio Mattarella. Chinese Minister of Culture and Tourism Luo Shugang joined Italian Minister of Cultural Heritage and Activities Dario Franceschini to deliver opening speeches in the Forum.

Following the opening ceremony, Dean of the China Tourism Research Institute Dai Bin presented the Report on China-Italy Tourism Cooperation and Exchanges, offering food for thought for attending industry leaders to shape the agenda for the ‘new era of tourism cooperation based on cultural exchanges.’ The Forum was divided into three sessions, probing new possibilities in tightening the Sino-Italian partnership in the pursuit of comprehensive tourist experiences that combine the old and new from the perspectives of heritage conservation, technology and sustainability respectively.

The first session centred on the theme ‘Entwining Heritage & Tourism Exchange.’ Leading the discussion on the importance of world heritage in promoting tourism was GTEF Vice Chairman and Secretary-General Pansy Ho, who was joined by CEO of Ctrip Jane Sun; Director and General Manager of Overseas Chinese Town Holdings Limited Yao Jun; Italian Undersecretary of Ministry of Cultural Heritage and Activities Lorenza Bonaccorsi; General Director of Museums of the Italian Ministry for Cultural Heritage and Tourism (MIBAC), Antonio Lampis; and Chairperson of FICO Foundation Andrea Segrè in a fruitful dialogue on the rejuvenation and sustainability of history, heritage and culture. ‘Macao is a textbook case of cultural diversification, which makes the city the perfect stage for the annual GTEF events. We have come a long way in building up holistic tourism on a robust economy,’ said Pansy Ho in her speech. ‘We must impart the idea of tourism as a means of passing down heritage and culture, as opposed to mere entertainment, to the younger generation. Through the tourist experience, we are passing on the torch of civilisation. In the future, our job is to engage young people through innovation, thereby nurturing in them the genuine love for our heritage and culture, and eventually a sense of national pride. I think this is the challenge facing the culturally rich nations of China and Italy.’

As a leading international exchange platform dedicated to the promotion of sustainable development of tourism, the Global Tourism Economy Forum strives to convene in Macao global policy makers, scholars, industry leaders, entrepreneurs and young professionals to catalyse discussions on the opportunities and challenges facing the global tourism economy, with a focus on China. The 9th GTEF is slated to open in Macao in October 2020. With its strategic position, Macao is a ‘Centre of World Tourism and Leisure’, and an integral city of the Greater Bay Area. To commemorate 50 years since the establishment of diplomatic ties between China and Italy, the GTEF has invited Italy, the first G7 member to participate in the ‘One Belt One Road’ initiative, to join the featured Chinese Province Gansu, a strategic bastion on the ancient Silk Road and ‘One Belt One Road’, on a cultural journey where the heritages of two great civilisations entwine as a prelude to a tightened bilateral partnership between China and Italy in tourism development.

Stay tuned for more information about GTEF via www.gte-forum.com and its social media channels.

About Global Tourism Economy Forum
The Global Tourism Economy Forum (GTEF) is hosted by the Macao SAR Government, in collaboration with World Tourism Organization (UNWTO), co-organized by the China Chamber of Tourism under the authorization of All-China Federation of Industry and Commerce (ACFIC), co-organized by Macao Government Tourism Office (MGTO), and coordinated by Global Tourism Economy Research Centre (GTERC). GTEF’s supporting units include the Ministry of Culture and Tourism of the People’s Republic of China, All-China Federation of Industry and Commerce (ACFIC), the Liaison Office of the Central People’s Government in the Macao SAR, Office of the Commissioner of the Ministry of Foreign Affairs of the People’s Republic of China in the Macao SAR, World Travel and Tourism Council (WTTC), Pacific Asia Travel Association (PATA), World Tourism Cities Federation (WTCF) and European Travel Commission (ETC).

Since its inception in 2012, GTEF has successfully established itself as an influential high-level cooperation platform to promote sustainable development in the global tourism industry with a focus on China. To date, GTEF had received more than 10,783 participants from 89 countries and regions, including delegations from 147 provinces and cities of Mainland China; and 570 internationally renowned speakers.