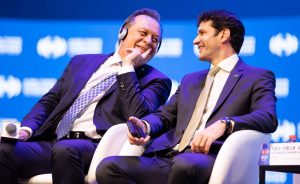 Macao (Macao SAR) – October 18, 2019 (travelindex.com) – The 8th edition of Global Tourism Economy Forum (GTEF or the Forum), under the theme of “Tourism and Leisure: Roadmap to a Beautiful Life”, puts Chinese President Xi Jinping’s Beautiful Life concept at the core of its discussion on the global tourism economy, showing that as more people cross-international borders every day, tourism and leisure have the potential to spur mutual understanding and enhance quality of life and happiness, ultimately creating a harmonious and beautiful life for all. The signature Face to Face, Ministers and Private Sector CEOs session in collaboration with UNWTO session unveiled the discussion in 14th October afternoon at MGM COTAI, Macao.

In his introduction, Mr. Zhu Shanzhong, Executive Director of UNWTO, stated, “Emerging middle class and millennials are leaning to responsible tourism. As an emerging tourism trend, consumer favour shifts to personal experience and personal attachment to the community.”

This edition got off to a spectacular start with attendance of around 2000 tourism ministerial officials, industry leaders, experts, scholars and participants from across the globe, along with delegations from GTEF 2019 Partner Countries Argentina and Brazil, as well as Featured China Province Jiangsu. Over 120 international and local media representatives cover the event.

Stay tuned for more information about GTEF via www.gte-forum.com

About Global Tourism Economy Forum
The Global Tourism Economy Forum (GTEF) is hosted by the Secretariat for Social Affairs and Culture of the Macao SAR Government, in collaboration with World Tourism Organization (UNWTO), co-organized by the China Chamber of Tourism under the authorization of All-China Federation of Industry and Commerce (ACFIC), co-organized by Macao Government Tourism Office (MGTO), and coordinated by Global Tourism Economy Research Centre (GTERC). GTEF’s supporting units include the Ministry of Culture and Tourism of the People’s Republic of China, All-China Federation of Industry and Commerce (ACFIC), the Liaison Office of the Central People’s Government in the Macao SAR, Office of the Commissioner of the Ministry of Foreign Affairs of the People’s Republic of China in the Macao SAR, World Travel and Tourism Council (WTTC), Pacific Asia Travel Association (PATA), World Tourism Cities Federation (WTCF) and European Travel Commission (ETC).

Since its inception in 2012, GTEF has successfully established itself as an influential high-level cooperation platform to promote sustainable development in the global tourism industry with a focus on China. To date, GTEF had received more than 10,783 participants from 89 countries and regions, including delegations from 147 provinces and cities of Mainland China; and 570 internationally renowned speakers.