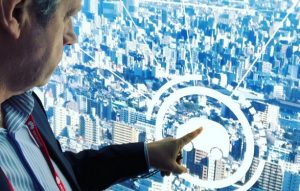 WISeKey Blockchain technology developed by WISeCoin creates a trusted decentralized and highly efficient way to record carbon emissions using digital identities on the blockchain. Recording all CO2 emissions that occur globally and requiring emissions contributors to offset them by purchasing and revoking the corresponding amount of tokenized digital certificates eliminates the need for taxation.

Furthermore, companies that have developed technologies that remove CO2 from the atmosphere will be able to register their impact on the blockchain and trigger the new emission of digital certificate tokens that will allow them to further invest in the technology. With this model it will be possible to generate new emission certificates, called WISeTravel Carbon Offset Tokens. In the case of shortfalls, the travel industry will invest into WISeTravel Carbon Offset Tokens in order to fulfill their requirements.

Professor Geoffrey Lipman co-founder of SUNx said: “We are delighted to cooperate with WISeKey by using state-of-the-art technology to bring a new Blockchain and Identity capacity to the world’s largest challenge, Climate Change Resilience, and one of the world’s largest industries, – travel and tourism. The SUNx ‘Plan for our Kids’ climate friendly travel program calls for 100,000 STRONG Climate Champions by 2030 in all UN States.

Through this collaboration we will be in a better position to deliver Climate Friendly Travel – measured, green, 2050 proofed, and meet the Paris Agreement Carbon targets.” These technologies will help galvanize regional, national, and local stakeholders to develop their own climate change programs using blockchain technologies – for air, oceans, land, cities, industries, rural communities, indigenous people etc. Each with their own vision of priorities and goals. The partnership ultimately aims at transforming overall production, consumption, and investment and better align them with the 2030 The Sustainable Development Goals (SDGs) and the 2050 Climate transformation.

Carlos Moreira, Founder and CEO of WISeKey said: “One of SDGs goals that stands out from the rest and is fundamentally existential, is climate change. Simply put, life on our planet is threatened, and without immediate, concrete actions the consequences will be irreversible – future generations will either freeze or fry and the intensifying consequences of extreme climate will continue to severely aggravate many of the other SDG challenges. Our special purpose Travel & Tourism Industry Blockchain Center of Excellence in Brussels will not only develop and deploy groundbreaking products and solutions for the industry and consumers but also harness the power of technologies to act as a catalyst of change and climate transformation.”

The Paris Agreement, with its 2050 national carbon reduction targets must be fully implemented and intensified every 5 years. In 2017, the world’s largest industrial activity, Travel & Tourism, formally embraced the SDGs, engaging public, private and civil society stakeholders in an International Year of Sustainable Development. Rightly so, to become a real force for good, we must be up with the mainstream curve on building sustainability into all growth and development aspirations. The main challenge remains how to keep Climate Resilience front and center when travel and tourism continues to massively grow.

The Blockchain Center of Excellence in Brussels will be fully interoperable with WISeKey’s network of Blockchain Centers of Excellence in India, Canada, China, Buenos Aires, Malaysia, Mauritius and Rwanda with new centers planned in the MEA region, including two in Saudi Arabia. All these centers will be interconnected with its 3 main hubs: Geneva, Toronto and Beijing, a Trust Triangle operating under a Common Trust Protocol, using WISeKey’s PKI hardened Blockchain technology, bringing trust and security, while maintaining the core Blockchain values of transparency, auditability, and traceability. WISeKey’s implemented and integrated PKI solution is complementary to any Blockchain platform, where it can assist with developing a better trust model for use within a distributed system and create a universal Trust Protocol for the Web 2.0.

Like all other Blockchain Centers of Excellence, the new center in Brussels will assist local Blockchain startups to promote their technologies internationally, facilitate the rapid adaptation and on-boarding of Blockchain-based solutions, foster stronger collaboration between the public, private and academic sectors and cooperate to ensure that the latest technological standards are made available in a safe and trusted manner.

About SUNx – Strong Universal Network
SUNx – Strong Universal Network – is a new system for Tourism destinations and stakeholders to build Climate Resilience in line with the targets of the Paris Agreement through Climate Friendly Travel. It is managed by the Belgian-based not-for-profit Green Growth & Travelism Institute (GGTI). The 2015 Paris Accords and SDGs launched, a 3-decade, low carbon transformation, recognizing “Climate Change is existential”. This is the rationale for SUNx – the Strong Universal Network. Under the initial guidance of our friend and mentor, the late Maurice Strong – sustainable development pioneer, we are creating a “Plan For Our Kids” a global Training and Lifetime Learning program to create a movement of 100,000 STRONG Climate Champions by 2030. They will advance Climate Friendly Travel ~ measured: green: 2050 proof ~ to support the Paris Accords & SDG13, underpinned by our technology Portal and network of cloud-connected centres. This will help bring Travel & Tourism into the “New Climate Economy”.

About WISeCoin
WISeCoin AG was formally established in August 2018 in Zug Switzerland. It manages all Blockchain initiatives and operations of WISeKey to pave the way for the daily use of 4th Industrial Revolution technologies. WISeCoin AG benefits from the WISeKey architecture as the first and only vertically integrated platform combining proprietary cybersecurity software and secure microcontrollers designed to protect connected devices against evolving cyber threats. WISeCoin is a Trusted Distributed Ledger Technology of Identity to store objects and people’s identity. It offers connected objects the ability to identify, authenticate and verify each other with a digital certificate. For each interaction, the Blockchain of Identity will verify the validity of each digital certificate to secure the interaction. To compensate the use of the platform, a micro service fee is charged through a utility token, called the WISeCoin token.

About WISeKey
WISeKey (SIX Swiss Exchange: WIHN) is a leading global cybersecurity company currently deploying large scale digital identity ecosystems for people and objects using Blockchain, AI and IoT respecting the Human as the Fulcrum of the Internet. WISeKey Microprocessors Secures the pervasive computing shaping today’s Internet of Everything. WISeKey IoT has an install base of over 1.5 billion microchips in virtually all IoT sectors (connected cars, smart cities, drones, agricultural sensors, anti-counterfeiting, smart lighting, servers, computers, mobile phones, crypto tokens etc.). WISeKey is uniquely positioned to be at the edge of IoT as our semiconductors produce a huge amount of Big Data that, when analyzed with Artificial Intelligence (AI), can help industrial applications to predict the failure of their equipment before it happens.

Our technology is Trusted by the OISTE/WISeKey’s Swiss based cryptographic Root of Trust (“RoT”) provides secure authentication and identification, in both physical and virtual environments, for the Internet of Things, Blockchain and Artificial Intelligence. The WISeKey RoT serves as a common trust anchor to ensure the integrity of online transactions among objects and between objects and people.